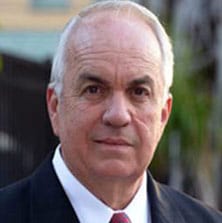 He graduated from Fort Myers High School and Stetson University. He received his Juris Doctorate from Stetson College of Law in 1977 and was admitted to the Florida Bar as well as the United States District Court, both Southern and Middle Districts, the same year.

After service as a Special Assistant State Attorney for the Twelfth Judicial Circuit and the Twentieth Judicial Circuit, he joined the firm of Strayhorn & Strayhorn, which was founded in Fort Myers in 1915 by Mr. Strayhorn’s grandfather and great uncle, Guy M. Strayhorn and Leonidas Y. Redwine.

Mr. Strayhorn has been actively involved with both Southwest Florida and the City of Fort Myers growth. Mr. Strayhorn presently serves as Chairman of the Fort Myers Housing Authority Board, on which he was originally appointed in 1988.

During his service on the Housing Authority, the Authority acquired a $20 Million HOPE VI Grant partnering $20 Million of Federal funds with over $60 Million in private funds to permit the public housing in the City previously known as Michigan Court to be demolished and replaced with up-to-date code compliant new 150 unit assisted living facility, as well as a 400 unit public housing incorporating tax credit development in addition to 300 additional tax credit apartments replacing outdated HUD developed Section 8 and private developer projects. In the 1980’s Mr. Strayhorn assisted in the initiation of the Downtown Fort Myers Property Owners’ which was instrumental in obtaining Lee County Judicial and Administrative Departments in the core of the City of Fort Myers and was involved in the required City actions to ensure Lee County expanded its Administrative and Judicial Center in its present location.

Mr. Strayhorn also served on the Downtown Management Corporation Inc. which furthered business recruitment and retention, and implemented revisions to building regulations in Fort Myers. Furthermore, he assisted the City in acquisition of parcels for the City of Palms Park located in the core of downtown and represented the Boston Red Sox Florida division in its initial years in spring training and the move from Winter Haven to the City of Fort Myers.

He has previously served as President of Business People United for Political Action, Director of the Edison Pageant of Light, Edison/Ford Home Advisory Board, State Director of the Florida Cattlemen’s Association, Charter Member of the Lee County Horizon Council, Director of Lee Memorial Hospital, Inc. and Director of Fort Myers Rod & Gun Club.

back to Board of Commissioners
Continue to Mattie Young